Breathe In, Breathe Out-

We woke up this morning to one snotty little boy, literally. Green goop oozing from his nose. I would wipe it and 30 seconds later it was back. We had a case of the never-ending-green-ooze and it wasn't pretty. Alongside the green ooze was a hackling cough and we figured it was best to call the doctor and see if we could just get the little man in and nip whatever it is that he had, in the bud. I dropped him off at daycare, went to work and set up an appointment for 1:30. Outside of a little bit of a cough and the running nose, he was same-old-Kaden. Ms. Brenda said he had a great morning and wasn't too concerned with anything but agreed with the holidays coming up it was best to have him looked at.

We arrived for our appointment and Kaden headed straight for the number sorter while I checked us in. His name was called, he ran right for the lady. We got to the room and he froze in fear. Shoes came off for his weigh in, 25.6 pounds. We headed back to the room and got his temperature taken, normal. His oxygen was taken (which is done by wrapping something around his big (but small) toe) and this was a fight, he hated having that done but it read 96%, normal but on the low end of normal. The doctor asked if she could send in her student to look Kaden over, we agreed, nothing wrong with Kaden having it done twice so someone else could get some practice in, right? WRONG! Kaden was not a "good" patient. He hated the stethoscope, he hated the tongue depresser, he hated the ear thingy (pretty good at medical terms). Basically he hated it all and he had to have it done twice. After the doctor looked him over she let me know that his lungs were rattling pretty good and that he could be on the onset of an ear infection. She wanted to go ahead and give him a breathing treatment there and then have another listen. A different nurse came in to administer the treatment and why, oh why, would this have a different outcome than everything else that just occurred. It didn't. I had to sit there holding him with one of his arms trapped behind my back, one hand holding his other arm down and then my other hand holding his legs from kicking. The nurse, she got to hold the mask in place and his head still. I cried as a sat there holding my son, I hated seeing him sick and having to go through something like this but then I caught myself and I thanked God that it was just a little wheezing, it could be much worse.

After a long 10 minutes went by, of which 9 1/2 were kicking and screaming, (Good News-by screaming he was opening up his lungs better and more and more medicine was working) the doctor came back in and had another listen. The clarity of his lungs had improved so much, so much in fact that we got to go home with a nice little present: 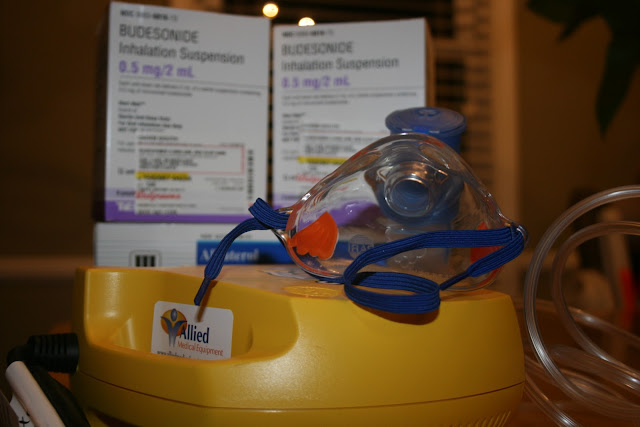 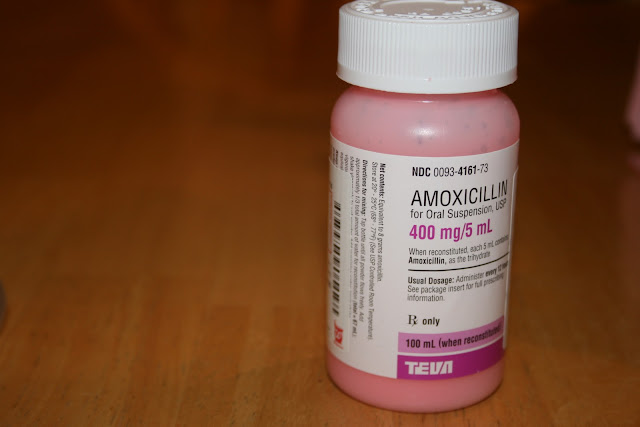 Luckily, I am no stranger to breathing treatments. My brother grew up on them, my sister has taken them once in awhile and I have given a number of them to my nephews, so I at least knew what needed to be done. We will be giving Kaden 3 breathing treatments a day-morning, noon and night until he is cough free for two days. He also is the lucky recipient of a dose of amoxicillin twice a day for the next 10 days.

As a self-diagnosed paranoid mommy, I often feel bad about calling the doctor when something seems so minor but in this case, it paid off. Never did I expected to leave the doctors office today with our very own breathing treatment, I was sure the diagnoses would be "Well, just give him lots of liquids and sleep but if things don't change in a week, bring him back in."

I wasn't looking forward to the next breathing treatment seeing how the first one went but we played with a few of the parts before it was time. Mommy put the fish mask on, we talked into it, we put it on Stoli-the mask was our friend. We started the air compressor up and Kaden held the hose and got to feel the air coming out of it-air compressor/noise was our friend. We put the two together and we got the same initial reaction but he quickly calmed down and sat quietly on my lap and took his treatment for the next 20 minutes. Maybe tomorrow morning we will get through it without any tears! Fingers are crossed, toes too, if anyone is counting! 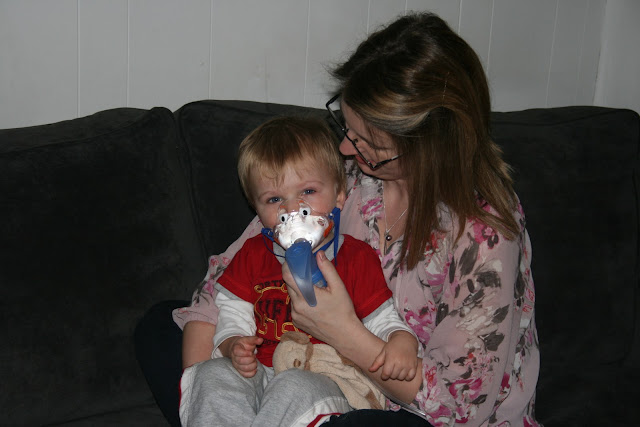