A Night at the K

After Kaden's first trip to The K, we weren't sure if we would be going back as a family again any time soon but I was on a business trip to Chicago and I wasn't about to spend my first night back away from my little guy! So we all loaded up for a family night at The K. The Cardinals are in town for the weekend I70 rivalry and Greinke was on the mound. We found our seats and as luck would have it, Slugger was just a section over and Kaden was so excited and watched his every move-we were off to a good start. Although the wind was stagnant, the temperature felt like it was rising, Kaden remained a trooper. With the crowd being split pretty evenly between Cardinal fans and Royals fans, Kaden spent the entire game clapping since he didn't know what team was doing what. In the end, Greinke triumphed and so did the Royals. (Hopefully there will be a lot of BROOMS at The K on Sunday!)We didn't stay for the Friday Night Fireworks since we thought it would be a little too loud but as you can tell, K-Man didn't miss a second of the game. Hopefully the next outing to the ballpark will have the same smiling ending. 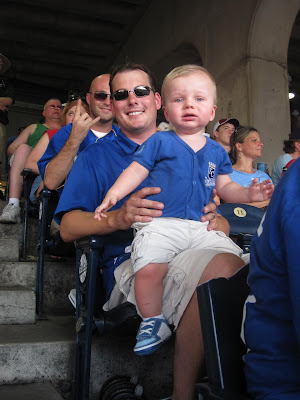 Two things: One, K-Man's legs look so chunky and they really aren't and two, one of the only times he wasn't happy, mommy gave him to daddy-Makes me feel good though!! 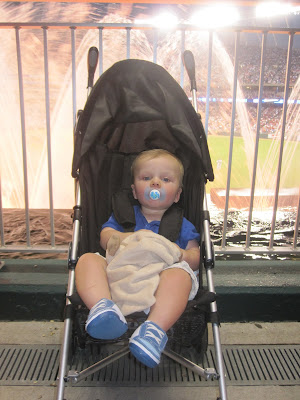 A couple nice Cardinal fans (that is an oxymoron if I ever heard one) let us sneak up here for this pic! 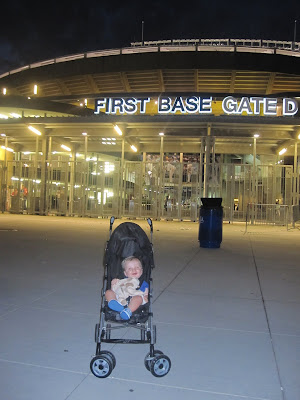 Still awake and smiling!!
Posted by Kayla South at 9:27 AM