Kaden turned 9 months old on Monday and I was hoping to be able to post some of the pictures we had taken of him but they haven't been uploaded to the photographers blog yet, so I decided to settle for one of the pictures I took. Again, disregard the drool! 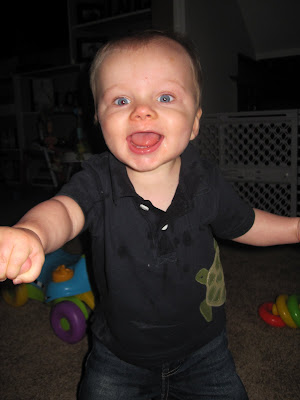 Kaden is standing up really well, mostly with help but during his photo shoot he let go of my hands and stood for a few minutes all by his BiGself. He is clapping by himself now, always would clap my hands together but never his own, weirdo! He is pretty good at carrying on conversations too. I will make a noise and he will make it back to me, he of course can't make all of the noises but the ones he can, he will even say back in the same sequence. He already knows what an owls says..Whooo, Whoooo-what a SMART boy. And then tonight, I couldn't believe my eyes when I went in to check up on whether or not he was asleep-he was sitting up in his crib!! At first I thought it was a fluke, I laid him back down, checked on him again after 5 minutes and sure enough, he was sitting up again! Daddy got home and he thought I was playing a mean trick on him until he hid out in there and saw it 3 times for himself! We couldn't be prouder-won't be long and he will be pulling himself up no matter where he is-baby proofing needs to be kicked into HIGH gear. Get the Flip, right?!? We pulled Kaden out of bed but he was too interested in watching the camera and it was 9:45 which was WAY past Kaden's bedtime. Hopefully we will get it on tape tomorrow night!

9 month pictures to be posted soon!! Can't wait to share them!
Posted by Kayla South at 10:13 PM