We have lots of fun and exciting plans for the weekend ahead but I can't give those plans away, so in order to find out what adventures we have planned, you are going to have to keep coming back to read along. (Justin doesn't like it when I talk about what we WILL be doing, someone might rob us or who knows what-I guess he is right, probably safer just to write about it after the fact. There are a lot of CRAZIES in this world.)

I decided to take today off and spend a little extra time with my wee-little one. First up on today's agenda, Deanna Rose, a little country farm in the middle of Overland Park. The best thing about Deanna Rose, (besides it being 10 minutes from my house) is that you get up close and personal with some farm friendly animals. The worst thing about Deanna Rose is that you still have the farm smell but what should I expect, we were going to a farm! Kaden loved looking at the goats and the swans, Mommy and Janet were amazed at how long a swan's neck is, that thing was twisted like a pretzel! We also got to stop by Grandpa Bob's Fishing Pond and we had to take a picture to show it to our Grandpa Bob! We didn't last too long at Deanna Rose, the sun was beating down and if you weren't in the shade then you were on fire. So after our day at the farm we headed to see Nanny (Kaden's 95 year old great grandma) and she was so excited to see Kaden. She got to watch us feed Kaden his first real table food, Chick-fil-a Nuggets (or Nugget in his case), yummy!


Although today we filled with lots of HIGHS, we of course had to have a LOW or else it just might not be a day at the Souths. Our low, Kaden got his first shiner!! And just in time for his 9 month pictures on Monday. He was standing and dancing and fell a little forward and knocked his head...poor little guy. So here is a picture of the shiner on day 1, I am sure it will get a little more black and blue before Monday's photo shoot! 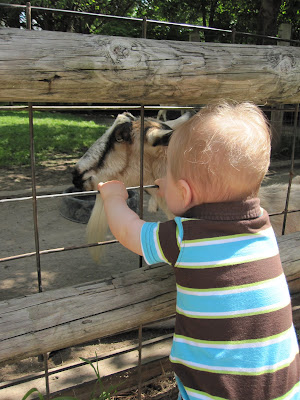 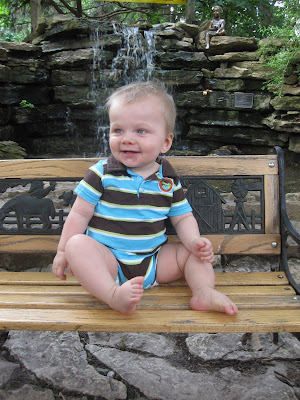 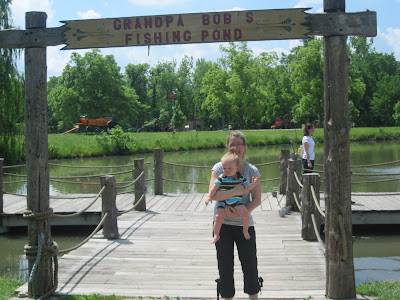 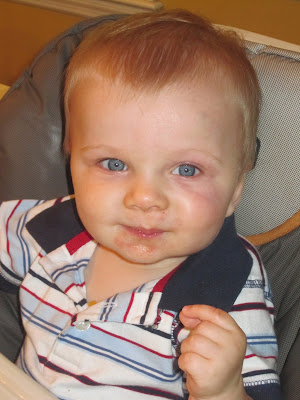