It is hard to believe that it has been 2 years, this Wednesday, since Grandma Dorothy passed away. She was undoubtedly one of the most amazing women I have ever met and will probably ever meet. Hopefully she knows just how much of an impact she has made on not only my life but every life she touched. 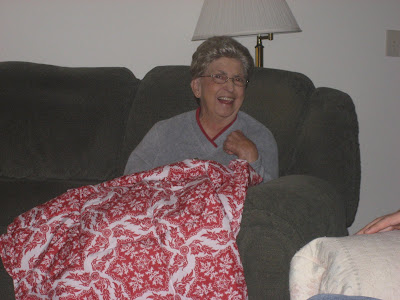 She never had a negative thing to say about anyone she met and always tried to find something positive about every situation which came her way. Her food was amazing and although we all have her recipes, it isn't the same and we all know it. She had the best greeting when she answered the phone and luckily I do have that voice imprinted in my mind forever. She had unconditional love and support for her family and was each one of ours biggest fan. She never forgot a birthday. She ensured that everyone had their favorite dish at holidays. She had the best, and I mean the best, aprons which she wore during holidays since she did ALL the cooking.
The last year of Grandma's life was tough for all but we were so lucky to know what was happening and cherish all those special moments with her. I can remember saying goodbye to her, she wouldn't let me stay the night because it was my bachelorette party and she wanted me to enjoy myself, I tried and thanks to a few great friends I was able to for a few hours that night but she was never far from my thoughts. I had left that day not knowing what the weeks ahead would bring, I would be getting married in 10 days on the beach, would my dad be there or would he be staying behind where he was needed, an impossible decision for him to make but we all knew where he was needed most. But Grandma had a plan, just like she always did. She passed in her sleep early Monday morning after all 3 of her boys were there with her. We spent the next 4 days celebrating her amazing life before loading up and heading down to the wedding. During her service, the pastor, said that she would always be with us like the waves in the ocean and during the ceremony we knew she was there, the waves were huge!

Kaden will unfortunately never be able to meet his Great-Grandma Hartley but that doesn't mean we can't tell him stories about her so on our way home to Carthage today we stopped by to have a chat with Grandma. Now, I know this picture might be weird to most people but it is as close to a picture as I will ever get of Kaden and his Great-Grandma Hartley. How she would have loved holding him and laughing at Papa Richard every time Kaden came to her over him! We love you and miss you every day!! 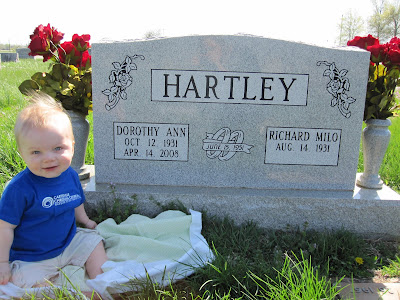