Nothing feels better than...

walking into the house, seeing your son for the first time in 5 days and him smiling from ear to ear at you! He certainly knows his mommy and daddy and you know, it almost makes leaving worth it, just so you can see that expression. 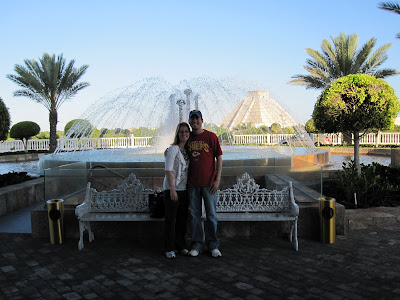 The only picture of us, the day we are leaving-SAD :0(
So now why were we gone and who stayed with Kaden? Justin and I took a little time off and headed to the Riveria Maya (Mommy actually had a work conference for a firm which she covers-it was all FUN but lots of WORK too). We were a little worried about leaving Kaden since this would be the first time both of us would be away from our little man but we knew he would be in good hands with his grandmas. Grammie Janet and Grandma Sara were going to take turns with Kaden. Grammie Janet came over on Tuesday night and stayed with Kaden until Friday when Grandma Sara picked him up from Ms. Melissa's and kept him until we got home today. We were very lucky that both grandmas were able to help us out with Kaden! Oh and don't forget the dogs, they took wonderful care of them as well. I will have to admit, I had to call a couple times each day to check up and make sure everything was going well and when I did, I just heard laughter in the background. I am not sure who was enjoying their time more, Kaden or the grandmas but one thing was for certain, we couldn't have left him in better hands. 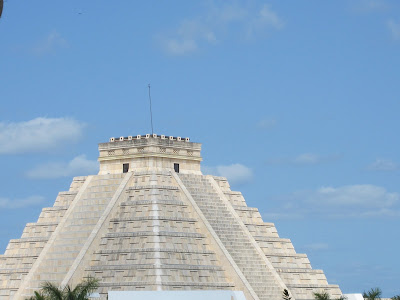 Now just like the very first time I left Kaden to travel for work, I came home and he was cutting his first tooth and after both daddy and I being gone this time, we come home and sure enough his top tooth is trying to break through! I can't believe he is already getting his top teeth!! We also learned a few new tricks while mommy and daddy were away, he is able to play patty cake with your hands and I am almost certain that for the past few weeks when "ma-ma-ma" was coming out of his mouth that he is saying Ma-Ma. I didn't want to announce it until now but after being gone and hearing it when we got home, it is official, ma-ma is his first word!
Check back next week for a picture of the cutest little leprechaun you have ever laid eyes on! 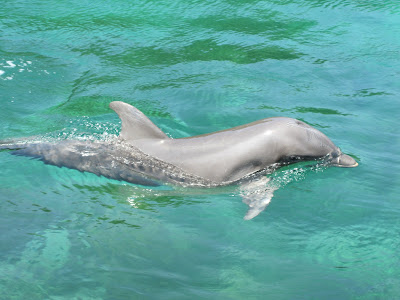 Paal, we got to swim with him! 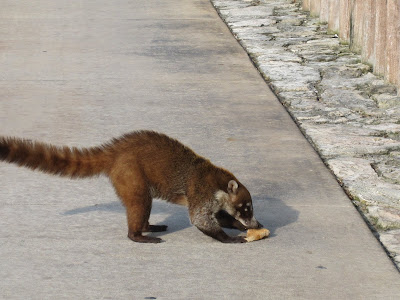 Mexican Raccoon, they were all over the golf course.
Posted by Kayla South at 9:50 PM