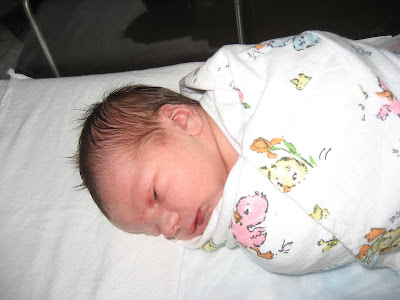 Six months ago we were in the hospital getting our very first peek at our little bundle of joy and now we are celebrating his 1/2 BIRTHDAY! And what better way to celebrate your 1/2 birthday than with your Cousin Blake on his SIXTH birthday, so Kaden and I loaded up in the tahoe and headed to Bentonville but we made a few stops along 71 HWY first. 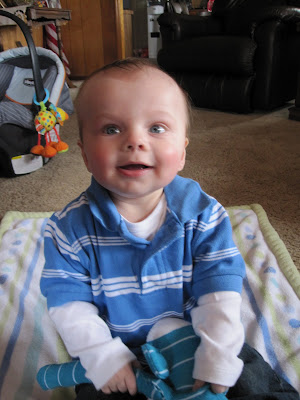 Our first stop was at Papa Tom and Grandma Sara's for the night. And boy was Kaden happy to see them. He was all smiles, all the time except for a couple times Papa Tom tried to make him laugh and just scared him instead. But by the time we were ready to go, Kaden was Papa Tom's little boy. On the way out of Carthage we made a pit stop at Papa Richard's to say hi. Kaden loved sitting on Papa Richard's lap and banging on the table with his hands. Papa couldn't believe how big he had gotten and is itching for the chance to feed him his first bite of ice cream. See, Papa Richard gave Blake his first bite of ice cream. Blake was the biggest momma's boy ever until Papa got out the ice cream, Blake would sit there so quietly and eat all the ice cream but once it was gone, he was back to momma. It won't be too much longer and he will be feeding Kaden his ice cream and I won't be able to say no, how could anyone! And trust me, if Grandma Dorothy was here, she would have the 2nd helping of ice cream ready and waiting for her turn-oh, how I wish Kaden could have met her. 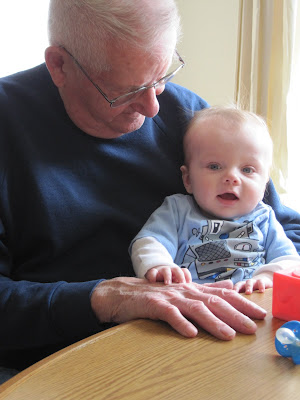 The trip to Bentonville didn't take long but we were ready to get out of the car and see Aunt Jennifer, she only had a few hours of Kaden to herself before the 3 wild ones came running through the door. Once the kiddos got home we had a full list of things to do, bake Blake's cake, play Super Mario Bros., put together his new toys, plan our Saturday of fun and did I say play Super Mario Bros.?!? Blake loves the new Super Mario Bros on the Wii and lucky for him, Aunt Kayla is pretty darn good! We went from World 2 to World 7 (skipped a few worlds) and now it is up to him and Brett to beat the game, good luck boys! 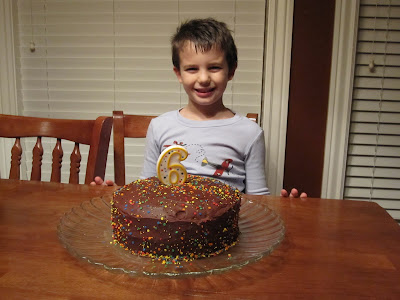 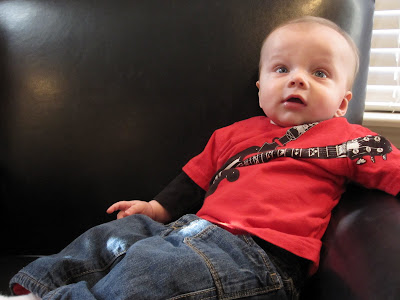 On Saturday, we went bowling and to Cold Stone for Blake's celebration. Papa Tom and Grandma Sara met us at Fast Lanes along with Cousin Brad since he lives in Bentonville. Now whenever the Hartley's get together and a sport is involved, there will be smack talking and money to be won. Kaden is finding out early on that his mother not only is one of the most competitive people he will ever know but most of the time she can back it up and in this instance he got to see his mom walk out of Fast Lanes with the trophy or in this case, $3.00 richer than she walked in. (Please note, only adults were in on the $$ game-Leah won bragging rights on the kids game!) After bowling we went to Cold Stone before heading to Brett's game. We all enjoyed some Like It ice cream, while Brett enjoyed some LOVE IT ice cream and was feeling the effects during his basketball game. However, you would never know it from the stands, Brett played the best defense I have ever seen him play and he even scored a few points too! We might have another basketball player on our hands. Speaking of basketball players, Kaden sported his first pair of new basketball shoes, AIR JORDANS and we got a basketball in his hands too, never too early to start the ball handling skills. 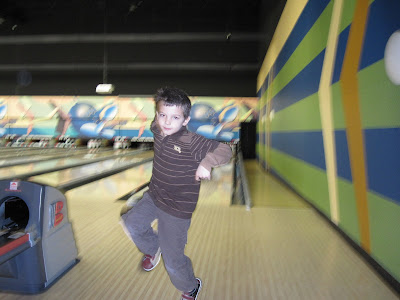 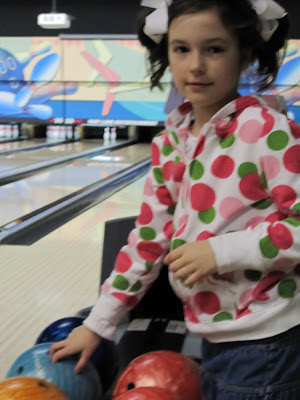 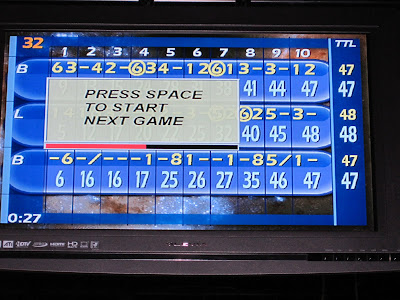 It was sad leaving the kids this morning but it was time to start our journey back to Kansas City. On the way home we stopped at Grandma and Grandpa Earl's to say hi, it had been about a month since we had seen them. Grandpa couldn't believe how well Kaden was sitting up, he hardly is wobbling anymore and Grandma was so excited that it was feeding time and enjoyed feeding Kaden his morning bottle before we got on the road again. Kaden was such a happy boy and has certainly brought so much love and joy into our lives these past 6 months. We are very excited to see what the next 6 months brings...crawling, walking, talking and lots and lots of BABY GATES! 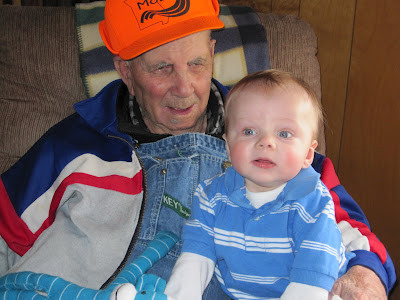 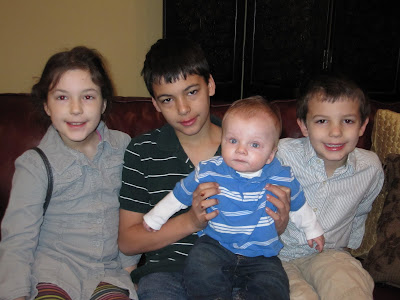 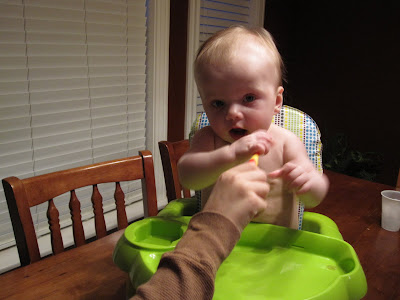 Blake feeding Kaden, I don't think Kaden wanted to wait on him! 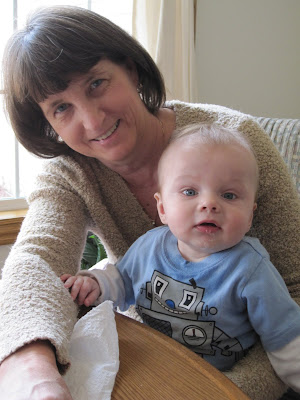 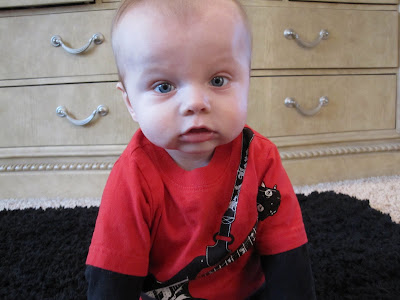